At one time, all the residences, or farmhouses, were one-room cottages with turfed roofs, like the Jönsas farmhouse that was moved to Äskhult in the 1970s.

Over the course of time, these small, simple cottages were changed to the framkammarstugor they are today owing to conversion or fires. The buildings have never been painted.

A new thatched roof was laid on the Bengts barn. A tamped earth floor was also made in one of the spaces.

The Derras pigsty, which was leaning, was drastically straightened out, as was the framework of Göttas stable, which also received a new thatched roof. The roofing shingles of the pigsty, or hôgghuset, which were falling to pieces, were replaced with new ones on the southern side. The Derras pigsty will serve as a stable again.

Our museum farmer Thomas wants to use the building for his two workhorses. The new feed hatches and stalls are in place. Parts of the building have now been converted into a hen-house, and a pig hut has been built under the stone base on the northern side. 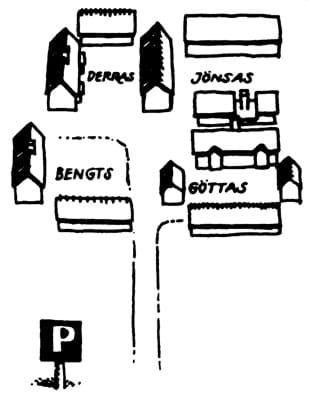 The outer covering on the western side of Derras farmhouse has been replaced owing to damage from rot. It was also discovered that the façade covering on the southern side was in poor condition. The entire gable has therefore gotten new coverboards. The kitchen door on the back side has had its diagonal boards replaced with vertical ones, and the door has thus been given an appearance corresponding to how it looked at one time.

The Derras barn, located directly opposite the farmhouse, is built of post-and-plank construction; it is a sensitive construction that has begun to have problems with subsidence. During the summer, parts of it were taken down in order to manage logs that were moving out of place. The barn will gradually be usable for educational purposes in order to show how the animals lived and were stabled.

Apart from all this, simpler maintenance work was carried out such as painting windows, clearing plants along the house foundations, and much else.

The café in Bengts farmhouse got a facelift. There was an old plastic carpet on the floor in the kitchen that did not fit the environment. To everyone’s delight, a broad-planked wooden floor was found beneath. New wallpaper was put up in the cottage, and the original colouration in the joiner’s workshop was recreated. Careful scrape tests were conducted with knives before the colours were determined.

We have changed the panels in a number of the buildings, including the Bengts farmhouse and the western gable at Göttas. Roofs have been re-laid and chimneys have been whitewashed.

Our skilled building preservation craftsmen, under the leadership of Frank Karlsson, have finished renovating the threshing wheel in the Jönsas barn. It will be tested during the year with the help of the horses our farmers handle gently, and with care.